The AFRL Cornell Center for Epitaxial Solutions leadership team holds a plaque commemorating the opening of the center in March at Cornell. 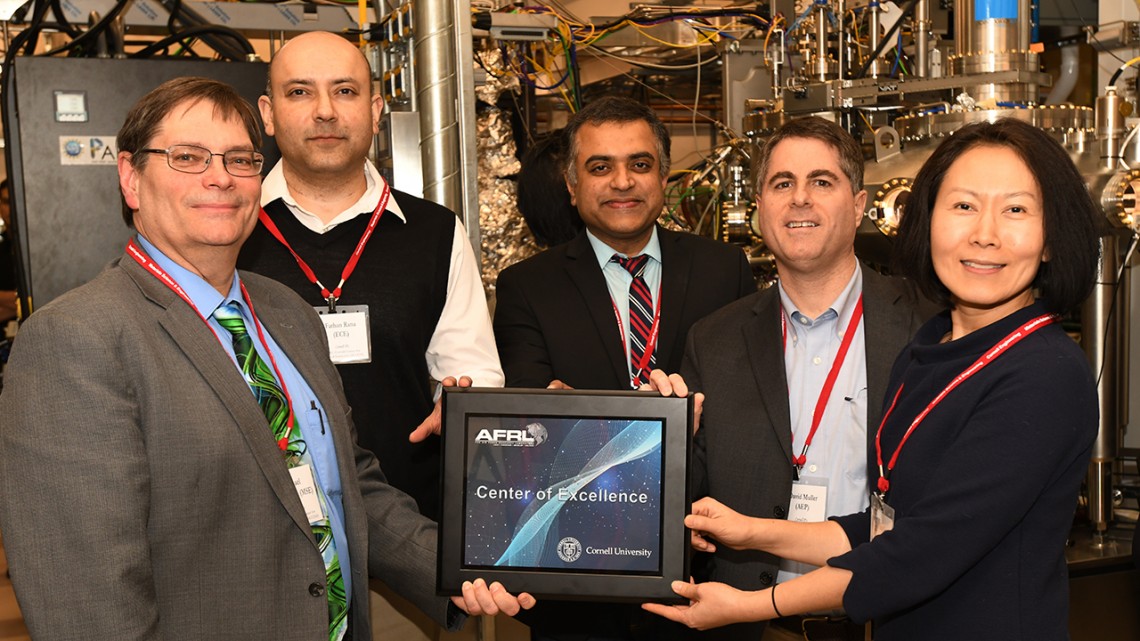 A new center established by Cornell and the Air Force Research Laboratory (AFRL) aims to discover the atomic secrets of beta-gallium oxide, a promising new material that has piqued the interest of engineers for its potential to allow electronic devices to handle dramatically more power.

Sixteen members of the AFRL joined researchers at Cornell March 7 during a daylong kickoff event for the AFRL-Cornell Center for Epitaxial Solutions (ACCESS). The center is made possible by a three-year, $3 million grant from AFRL with additional funds from Cornell and an option for a two-year extension.

“The way beta-gallium oxide atoms are arranged is really unique; it’s the only semiconductor material that shows this structure,” said Mike Thompson, associate professor of materials science and engineering and director of the center. “It’s shown potential to be a key disruptive material for high-powered electronics.”

Silicon has long been the go-to semiconductor material for electronic devices, but with the emergence of electric vehicles, renewable energy sources and 5G communications networks comes a need for a materialthat can handle higher voltages, higher power densities and higher frequencies. And if beta-gallium oxide proves to have the performance that is predicted, it will enable a wide range of new devices and applications.

“It’s a new frontier in terms of just how hard you can drive a device and understanding where our current models break down for devices we use today,” said Gregg Jessen, AFRL fellow and principal electronics engineer, adding that applications could include compact power supplies for new types of radar systems, communications technologies and sensors.

“Cornell has a long history of being experts in compound semiconductors and has expertise where we don’t, so our skill sets complement each other,” added Jessen.

Some of the earliest research on beta-gallium oxide’s value as a semiconductor has been conducted by Huili Grace Xing and Debdeep (DJ) Jena, both professors of materials science and engineering and of electrical and computer engineering. Recent samples of the material synthesized by their research group produced some unanticipated results, according to David Muller, professor of applied and engineering physics who analyzed the samples’ atomic structures with his state-of-the-art microscope.

“Like people, what makes a material interesting is its defects, and we’ve already seen some exciting defect structures in the materials Grace and DJ have grown,” said Muller, who is also a member of the center’s technical team. Discoveries have included new materials and atomic structures when the beta-gallium oxide is mixed with other elements such as tin or aluminum.

The research will continue under the center, where engineers will focus on developing growth and processing methodologies for high-quality beta-gallium oxide, as well as developing a fundamental understanding of the material’s properties.

Rounding out the technical team is Darrell Schlom, the Herbert Fisk Johnson Professor of Industrial Chemistry, who will focus on synthesis of the material, and Farhan Rana, professor of electrical and computer engineering, who will focus on understanding atomic defects through optical probes.

The center also includes an exchange program between Cornell and the AFRL in Dayton, Ohio, AFRL researchers visiting Cornell will be able to access facilities associated with the center, including the Cornell NanoScale Science and Technology Facility; the Cornell Center for Materials Research; the Platform forthe Accelerated Rea lization, Analysis and Discovery of Interface Materials; and the Cornell High Energy Synchrotron Source.

Meanwhile, Cornell students involved in the center will spend a year in Dayton, where they will have the opportunity to apply their education to new research challenges at the AFRL.

“The value of these types of centers is immeasurable to the College of Engineering for a number of reasons,” said David Erickson, S.C. Thomas Sze Director of the Sibley School. “They allow us to develop deep partnerships to give our students real-world experience, to marshal our resources to meet national needs, and allow us to dedicate our science to solve important problems.”