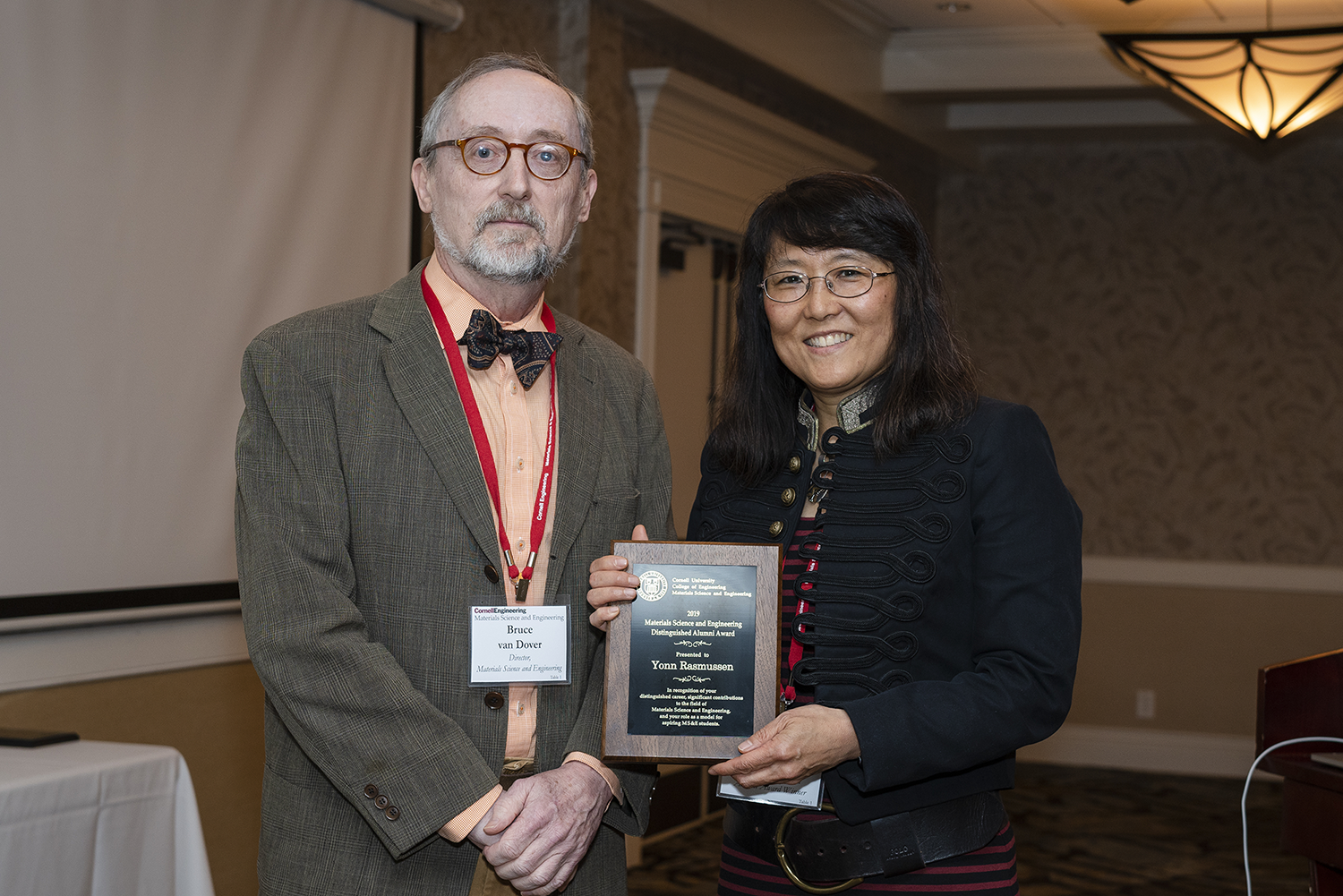 If you were to draw a circle centered on Gaithersburg, M.D. and having a radius equivalent to a six-hour drive from that center, you would see the entirety of places Yonn Rasmussen and her parents were willing to consider for college. Let’s call it “Yonn’s Circle.” Admittedly, that circle would contain some stellar schools—Princeton, the University of Pennsylvania, Carnegie-Mellon, the University of Virginia, and Columbia, just to name a few.

But for a high school senior interested in math, science, engineering, law, and cultural anthropology, two places bubbled up to the top of the list: Columbia University in New York City and Cornell, in Ithaca. “When I was little I was a very verbal child,” says Rasmussen during a recent phone interview. “My parents thought ‘oh, she’s probably going to be a lawyer,’ but in high school I applied for and won a scholarship from the Society of Women Engineers (SWE).

“It was given in the form of two classes at the University of Maryland.”

The classes Rasmussen took were Engineering 101 and an engineering career exploration class that allowed students to get a taste of what each of the engineering disciplines was about. “Because of those two classes, I knew I wanted to major in engineering,” says Rasmussen. “But I was also always interested in the intersection between technology and the humanities, so I knew I wanted to go to a school that was a true university rather than a technical institute. I guess you could say I wasn’t a typical geek,” says Rasmussen with a chuckle.

Rasmussen and her parents visited Columbia, and her parents were intimidated by New York City. Then they came to Ithaca and loved the campus. The decision was made; Rasmussen came to Cornell. It should be no surprise that she joined SWE at Cornell right away. The connection has lasted to this day, with Rasmussen coming back to campus for SWE events over the years whenever she is able.

Once at Cornell, Rasmussen was unsure about what engineering discipline to major in. Before affiliating with a department, she shopped around to find the best match for her interests. “I decided on Materials Science and Engineering, partly because of a conversation I had with Professor Ruoff,” says Rasmussen. (Arthur Ruoff was a longtime faculty member in the Department of Materials Science and Engineering and served as department chair for ten years.) “He sat down and we talked and I was so impressed that the department chair actually took the time to talk with me. By the end of the conversation he asked me when I was going to be the department chair. That made such a huge impression on me.”

Rasmussen liked that the study of materials brought in so many of the subjects she was interested in: physics, chemistry, chemical engineering, and physical chemistry. She was also excited by the prospect of getting into a lab and doing research as an undergraduate. As a junior she took part in the co-op program and worked at General Electric’s (GE) Corporate Research Center in Schenectady, NY. “The co-op program always seemed like such a great opportunity,” says Rasmussen. “I felt like everyone should do it. I got to work on a nickel-based super alloy used in jet turbine engine blades—we were trying to design a material to have certain specific properties such as corrosion- and fatigue resistance. It helped me see that I loved the application side of materials science and engineering as much as the theoretical side. It also helped me see how much I cared about the commercialization of technology.”

Fully taking advantage of the breadth of what Cornell had to offer, in addition to classes within her major as an undergrad, Rasmussen took several classes and seminars in social anthropology and psychology “I was often the only engineering student in those classes,” she says. “I really liked seeing the tools used by other cultures and how technology influenced the development of different societies.”

“At first, I thought I would just get a job after graduation,” says Rasmussen. “But some of my co-op supervisors at GE talked to me about going straight into a doctoral program.” Rasmussen went through some job interviews as a senior and even received several attractive offers, but in the end she took the advice offered by her GE supervisors and went on for a Ph.D. at Cornell in Materials Science and Engineering. Under Professor Barry Carter, Rasmussen explored the structure property relationship of materials through the study of the microstructure of ceramic grain boundaries and metal/ceramic phase boundaries using high resolution electron microscopy.

Rasmussen took her Ph.D. and went right to work for the Xerox Corporation. “I started out doing research and technology development in photoreceptors, but I was always interested in how to get products to market,” says Rasmussen. “Xerox has been great for me because over time I have had opportunities to lead organizations with engineering as well as global manufacturing capabilities, productizing technologies into the marketplace.” Rasmussen has had a very successful career thus far with Xerox and has more than twenty five patents. She has risen to the rank of Vice President of the Xerographic Component Systems Group, where she is responsible for technology, product development, and worldwide manufacturing operations in the U.S., the Netherlands, Canada, and Brazil.

More recently she has been developing large scale printed electronics manufacturing capabilities to deliver printed addressable memory. She is enthusiastic about this burgeoning field of printed electronics and how it has the potential to revolutionize how we live through its application to smart objects in the new world of the Internet of Things.

In a recent wide-ranging discussion of her career and what she has learned from it, Rasmussen makes it clear that she is still that same person that was interested in both engineering and the humanities back in high school. There is discussion of technology, but also much talk of sustainability, ethics, organizational dynamics, and the value of self-reflection. “No matter what you decide to do for a living,” says Rasmussen, “you are confronted by choices. You have to be conscious and thoughtful about your decisions. You should always be asking yourself if your decisions are aligned with your values. I am lucky to be in a position where my values and my job coincide. I hope to make the world a better, more sustainable place.”

Rasmussen also stresses the importance of her humanities studies to her career. “It is essential to understand organizational dynamics and how to navigate through the big picture. A person can be very smart and technologically skilled and still not understand the high-level dynamics.” Even today, years after graduating, it is obvious how grateful Rasmussen is to Cornell. “I learned so much more than engineering at Cornell. There is an intellectual breadth here that is hard to match anywhere else.”

One value held dear by Rasmussen is the importance of giving back. She is the Xerox Executive Liaison for Cornell with a focus on recruiting Cornell graduates to work for Xerox. She is on the advisory board of the Department of Materials Science and Engineering at Cornell. She participates in student mentoring sessions hosted by the Cornell chapter of SWE, and mentors Cornell students through the Cornell sponsored Externship and FRESH program. And she is the Chair of the Mentoring Committee of the President’s Council of Cornell Women.

Over the years, the circumference of “Yonn’s Circle” has grown to encompass the world. But at the center of that circle are still the things that were most important to her as a bright 18-year old: family, the intersection between engineering and humanities, and Cornell.