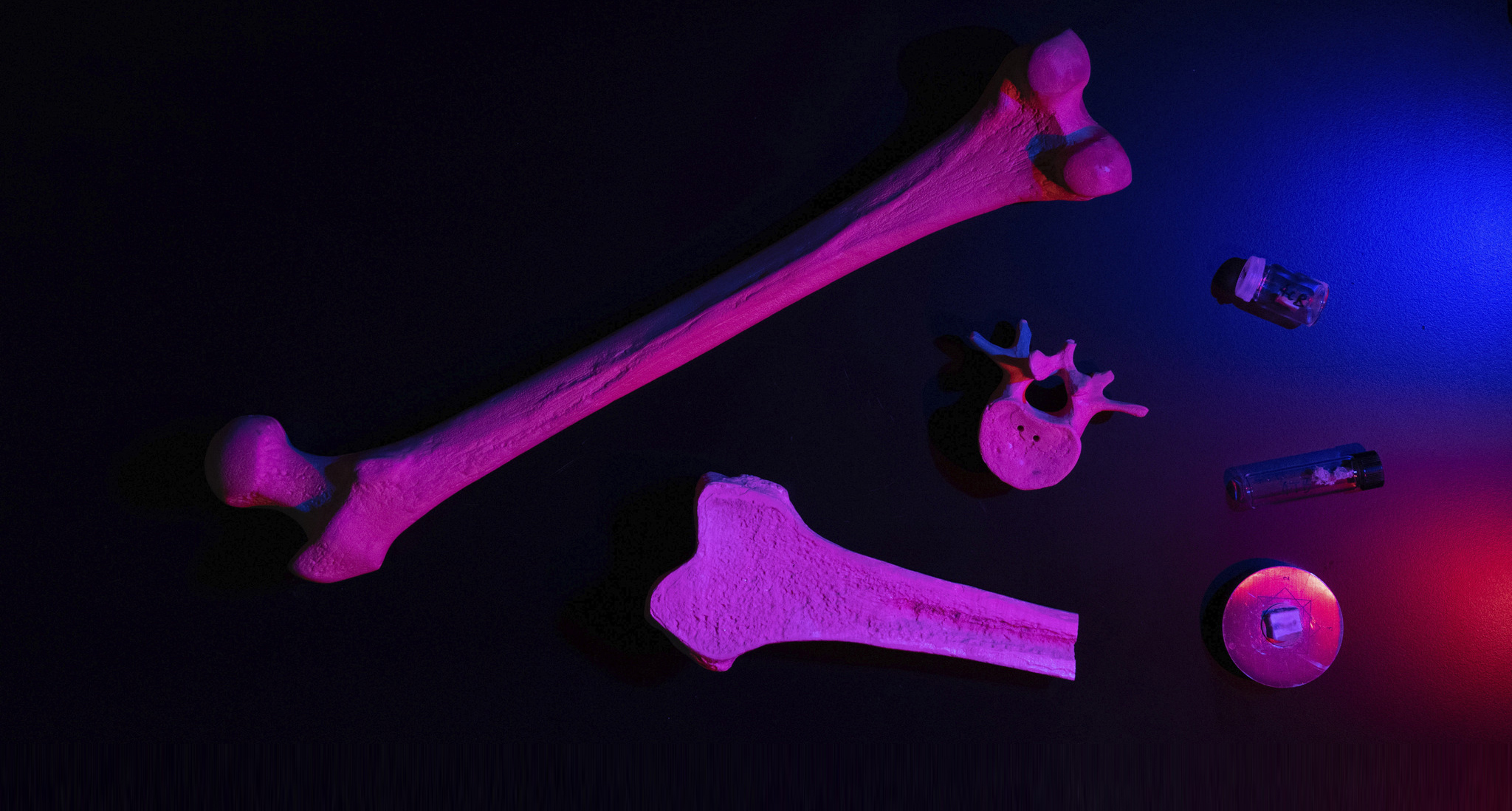 When Erik Taylor joined the Eve L. Donnelly Lab, Materials Science and Engineering, he had lots of first-hand experience with broken bones and how they heal. He had broken nine bones. He didn’t know that he would later conduct research on bones and how to help them heal.

Neither did he know this during his internship in Zurich, Switzerland, when he was mechanically testing ceramics, constructed from synthetically-produced nacre, also known as mother-of-pearl, the material found in seashells.

In the course of his first-year of graduate school at Cornell University, one of his professors said, “A Ph.D. is one of the last opportunities to do something completely different.” This resonated with Taylor. Shortly thereafter he would be exploring bone at the small, micro, and nano scale in the Donnelly lab.

HOW BONES CHANGE WITH DISEASE

Taylor first worked on basic science research, validating the standards of measures the Donnelly Lab uses. He says, “I was using chemistry and basic physics to confirm, in synthetic systems, that what our lab is looking at in bone tissue actually has legitimate physical meaning. Are the techniques that we use for synthetic systems valid when we use them for living bone tissue?” Successfully, his findings confirmed that their techniques are valid when applied to bone tissue, validating their usage in the lab.

Taylor, then, began translational research that aligns closely with the Donnelly Lab. In a collaboration with scientists from University of California, Davis and University of Missouri, Kansas City, Taylor evaluated the effectiveness of various drug treatments for osteoporosis in rats. “Bone is a dynamic, living tissue. It is constantly being created and reabsorbed. In patients with osteoporosis, however, new bone is being formed a lot less quickly than bone is being reabsorbed,” explains Taylor. “So the bones become smaller, weaker, and more brittle.”

SEARCHING FOR BETTER TREATMENT FOR OSTEOPOROSIS

Typically, there are two different treatments for osteoporosis. One of the treatments, the most common, is to take bisphosphonates. These drugs act to stop bone from being reabsorbed. The other treatment, which is to inject parathyroid hormone (PTH), stimulates the formation of new bone. Both of these treatments have their downsides. Taking bisphosphonates long-term leads to old and brittle bones. On the other hand, PTH can only be administered in limited durations because of a potential increased risk of developing osteosarcoma, a rare and deadly cancer

The differential mechanisms of these anti-resorptives allows them to be combined, potentially overcoming each treatment’s downside and producing better results than monotherapies (using only one or the other) alone. Therefore, Taylor and his collaborators were excited to see what happened when the two treatments were administered sequentially. They treated rats with osteoporosis with a regime that began with a round of bisphosphonates to prevent further bone loss, then a round of PTH to stimulate new, healthy bone, and finished with another round of bisphosphonates in order to lock in the newly created bone. They compared the bones of these rats with those that had been treated with only bisphosphonates, only PTH, or rats that did not receive any treatment

What they found in their experiment supported their hypothesis. The rats with the dual-drug treatment had stronger, more robust bone structures than any of the other groups. Taylor and the Donnelly group went one step further, using their expertise in characterizing micro- and nano- scale composition of bone to identify additional elements that contributed to stronger, healthier bone.

“Most of the improvement in the bone was in the collagen,” Taylor says. “The rats that underwent the new drug treatment had collagen that was less cross-linked than the other treatment groups. Less cross-linkage is generally a sign that the bone is less brittle.”

The early success of these experiments shows great promise for developing a successful, cost-effective treatment for osteoporosis in humans. “PTH injections are about $900 a month, whereas bisphosphonates are only $10. Combining these treatments would make sure bone health is maintained while treatment costs stay affordable,” Taylor says. 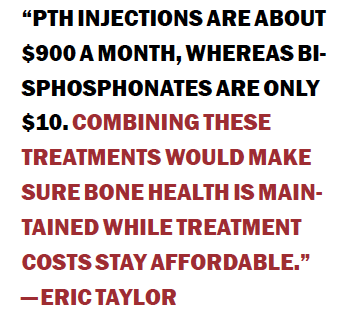 Taylor also works on a project that further showcases the Donnelly Lab’s specialty in characterizing bone at microscopic levels. He looks at bone tissue in patients that have experienced an atypical femoral fracture, which puts the patient at a much higher risk of mortality than individuals who experience regular fractures. The patients most susceptible to atypical fractures are post-menopausal women with osteoporosis who underwent long-term treatment with bisphosphonates. The question that Taylor and the Donnelly Lab are attempting to answer is why these individuals are more prone to these types of fractures.

“We know that very small changes in the composition and distribution of material properties in the bone play a role, along with other factors such as bone geometry, in atypical fractures,” says Taylor.

However, atypical fractures are rare in clinical settings, and the Donnelly Lab only studies tissue obtained from real patients. For this reason, Taylor is collaborating with researchers at Villanova University to create computer models of the bone microstructures, inputting experimental data into those models to identify which microstructures appear to be most important in causing fractures.

Taylor says, “From our experimental data, we showed that structures called cement lines deflect cracks that are propagated in the bone, helping us to better understand why atypical fractures are occurring. And now, we are able to look at and manipulate those cement lines with computer models. This allows us to figure out exactly how they might be implicated in fracture development.” The project aims to increase the Donnelly Lab’s expertise in understanding bone at microscopic scales.

Though challenging, Taylor has enjoyed the switch from inorganic and synthetic chemistry to organic materials.

Taylor says, “I always knew I wanted to do something with chemistry. Both of my grandparents were big-time chemists. My grandfather was one of the people who worked on the hydrogen bomb. My grandmother researched the chemistry of photosynthesis. I still do chemistry, too— bone chemistry.”