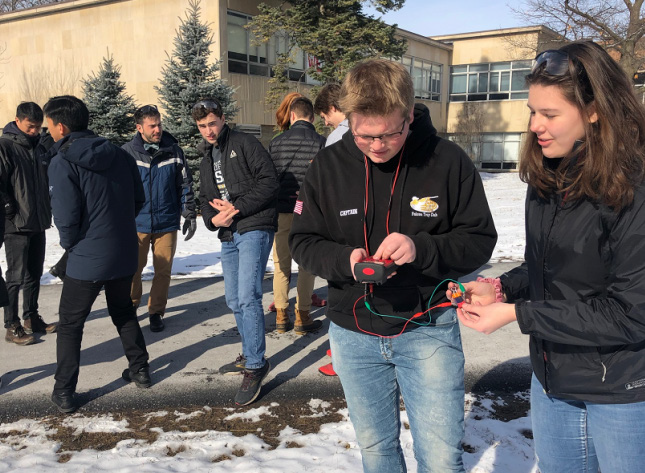 If you happened to be walking through the Engineering Quad at lunchtime on Thursday, January 30 you may have seen a group of high school students holding small devices up to the sun. After a few moments, these same students were calling out numbers and comparing results with other students. If you had stopped to ask someone in the group what they were doing, you might have been surprised by the answer.

John Eom, a Ph.D. student in the Department of Materials Science and Engineering (MSE) and co-creator of the lesson the students were participating in that day, sums it up: “They made berry-powered solar cells.” You read that correctly—the students used crushed berries and just a few other ingredients to create cells for turning light into electricity. Eom and Alicia Cintora, (who is also an MSE Ph.D. student), first designed and taught the lesson in 2019. They took what they learned last year, altered the plan a bit to cut out some of the downtime, and then taught the new-and-improved version of the lesson this year. The lesson takes two days. On Day One, small groups of students each assemble cells, carefully recording several variables in their assembly process. Then each completed cell is tested to see what voltage it produces. Because the production process for each group’s cell varied, the cells also had highly variable outputs.

On Day Two, students shared their results from Day One. “We heard from the teams that got the best results,” says Cintora. “And then as a group we altered the procedure to reflect what we learned from Day One. We wanted to get the students thinking about how they could consciously design an experiment.”

This lesson grew directly out of an Engaged Cornell grant received by Julie Nucci, who recently retired from positions as an Adjunct Professor of Materials Science and Engineering and Director of Education and Outreach for PARADIM, a National Science Foundation platform that helps users create new interface materials. Cornell is one of several universities involved in PARADIM.

Those high school students you may have seen in the quad that day? They weren’t on campus just to visit. The permanent, year-round classroom for their senior year of high school is located in Thurston Hall—on the Engineering Quad. They are part of the New Visions Engineering Program launched three years ago by Nucci and Jim Overhiser, PARADIM K-12 Education Director, in collaboration with the Tompkins- Seneca-Tioga Board of Cooperative Educational Services (TST BOCES), as the K-12 education and outreach program of PARADIM. Their teacher is David Syracuse and the program allows them to explore various engineering careers while having access to some of the facilities and faculty of Cornell Engineering.

Observing the two-day progress of this berry-powered solar cell lesson was Kevin Ng. Ng was in Ithaca visiting from the University of Texas-Austin. He was here for the specific purpose of watching the lesson and then considering it for inclusion in a nationally distributed curriculum called Engineer Your World (EYW). This course, taught as part of the New Visions Program, gives students the opportunity to receive three engineering credits at UT Austin funded by PARADIM. Engineer Your World is described as “an innovative, student-centered curriculum that engages learners in authentic engineering experiences and inspires them to embrace an engineer’s habits of mind.”

Nucci had previously learned about the EYW curriculum and noticed the lack of materials science and engineering incorporated in the curriculum. She partnered with Cheryl Farmer, EYW Program Director, in writing the Engaged Cornell proposal that funded the creation of this berry solar cell, MSE-focused lesson for the Engineer Your World Curriculum. The opportunity to raise student awareness of materials science and engineering at the high school level across the country was the driving force behind the grant.

After fabricating their berry-powered solar cells, taking their measurements, and comparing the results, the students now have a better idea of what is required to create a rigorous multi-variable experimental design. And Kevin Ng saw first-hand the students’ engagement in what will become the first MSE lesson for the Engineering Your World curriculum, scheduled to debut this fall.