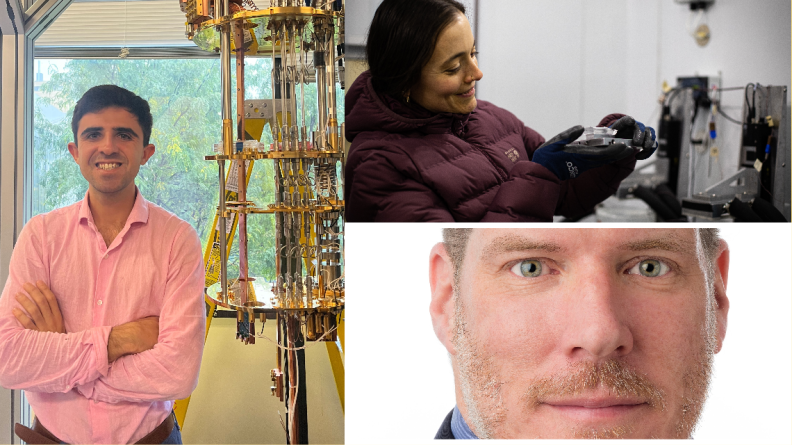 After graduating from Cornell, materials science and engineering alumni pursue a myriad of career paths that include advanced degrees, startups, and working in national, industrial, and academic research labs developing the technologies of tomorrow. Alumni also pursue careers in business, law, and medicine thanks to a strong technical background covering a broad sweep of science and engineering.

Three alumni shared their career paths and how Cornell inspired their journeys. They are building the foundations of quantum computing, protecting military assets through the control of ice crystals, and securing the intellectual property that will transform the future. While their careers are different, they are united by an education able to take them almost anywhere. 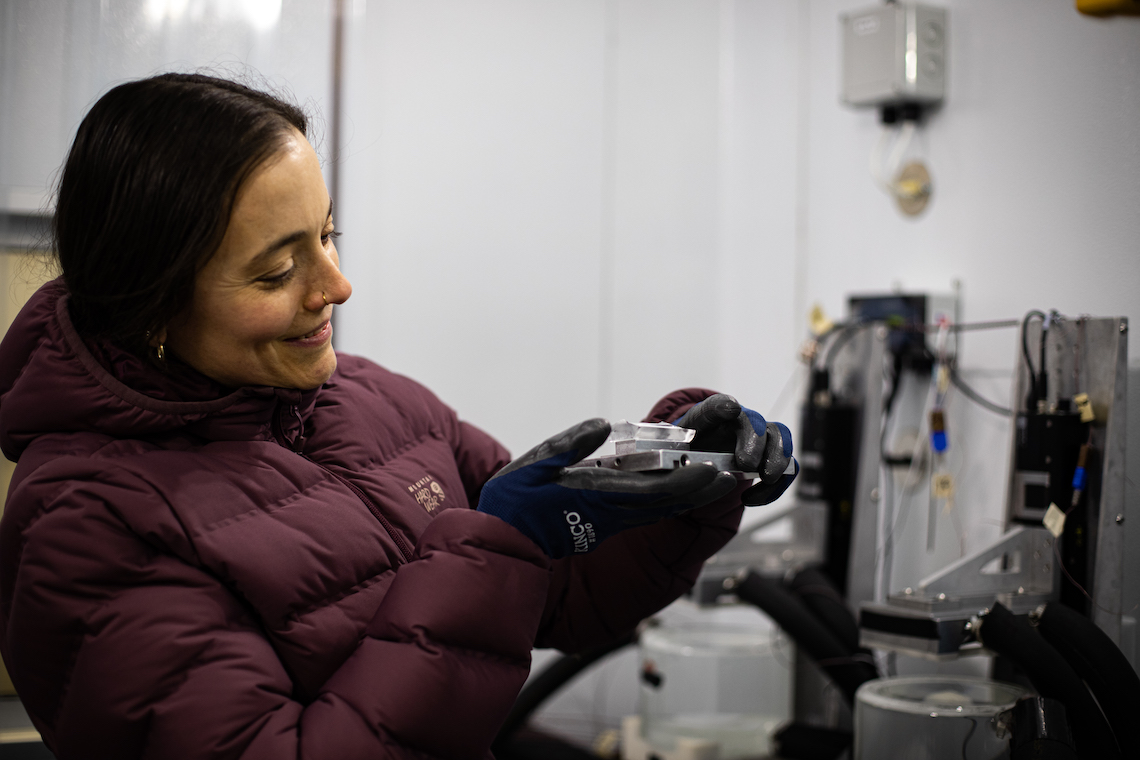 Glazed windshields, slippery roads, and downed powerlines – anyone living in a cold weather climate knows ice can be an enemy. The U.S. military knows this, too, which is why they recruited a Cornell MSE alumna to modernize a materials-focused research program within its Cold Regions Research and Engineering Laboratory, also referred to as CRREL.

Emily Asenath-Smith, Ph.D. ’15, considered a number of offers before accepting the position of research materials engineer at CRREL, which is operated by the U.S. Army Corps of Engineers and supports military and other federal organizations such as NASA.

“I was attracted to the flexibility and autonomy that I could have in shaping a program in ice materials research,” says Asenath-Smith, whose dissertation at Cornell was focused on bio-inspired crystallization of materials for sustainable energy applications. “It was immediately apparent to me that a huge majority of key topics in ice materials were fundamentally based in surface and interface science and crystallization, and structure-property-processing relationships. It is just that here, ice was the material and its behavior is quite a lot like a ceramic at high temperature.”

Crystallization of ice on surfaces, or ice adhesion, is something CRREL is working to prevent in order to protect soldiers and military assets such as boats, airplanes, and other equipment stationed in extremely cold environments.

“The truth is that there are no formal standards for measuring ice adhesion,” says Asenath-Smith. “We are focused on improving measurement accuracy, developing a quantitative analytical framework for those measurements, and providing unbiased assessment of ice mitigation technologies developed at academic and industry labs.”

Asenath-Smith’s research team at CRREL is not just focused on ice as an adversary, but also ice as a resource, and they are studying its potential use as an indigenous construction material by manipulating its thermal, mechanical, and optical properties.

“These studies are helping to inform the use of natural ice in cold regions to improve roadways and stabilize permafrost, for example,” says Asenath-Smith, who adds that her Cornell MSE education prepared her for the job by helping her to develop an intuition for designing and interpreting research.

Asenath-Smith was also part of the Integrative Graduate Education and Research Traineeship program at Cornell, where she met graduate students from different departments and was exposed to a variety of topics in materials science and engineering. The program is also where Asenath-Smith learned to communicate her science, something she says has been invaluable to her career and personal life.

“I learned about visual communication and learned to use multi-modal methods to communicate with diverse audiences,” says Asenath-Smith, who recommends current students seek out opportunities to learn science communication. “It made me realize that all programs need to train students in communication – it doesn’t matter what you are trying to present to someone, be it art or research, the skills are the same.” 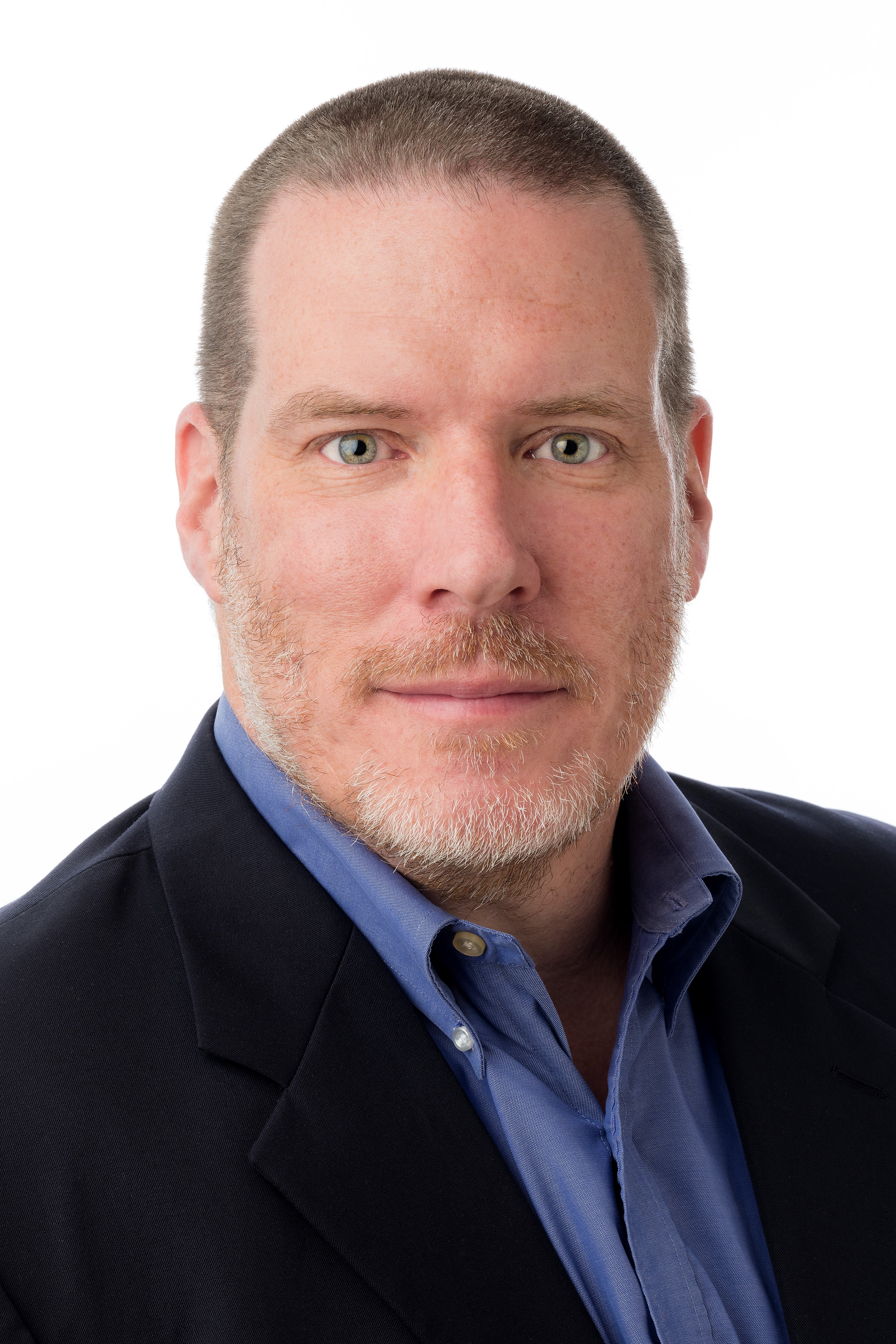 When he was a process development engineer, Michael Russell, Ph.D. ’94, enjoyed working with piezoelectric thin films, chemical vapor deposition systems, and perovskite materials. Through his materials science research, he would eventually develop an entirely new passion – helping his company secure their intellectual property.

After graduating from Cornell MSE, Russell was awarded a National Research Council postdoctoral fellowship at the Naval Research Laboratory in Washington, D.C., where his research focused on wide bandgap semiconductors, including silicon carbide for electronic and mechanical applications. Russell was later awarded a Fulbright Fellowship where he collaborated with scientists at the University of Rosario in Argentina on investigations related to the evolution of active species for metal surface nitriding via optical emission in a pulsed plasma.

Russell eventually became an engineer for ATMI, a world leader in development process solutions for the semiconductor industry. It was there he developed chemical vapor deposition (CVD) and integration processes for piezoelectric thin films used in semiconductor devices and systems. This included the assembly, maintenance, and sometimes redesign of a CVD system for producing lead zirconate titanate thin films.

An aspect of ATMI’s business model also included identifying and protecting the company’s intellectual property, especially through patents and trade secrets. Russell got involved and took on the role of overseeing the intellectual property related to his group’s research and development efforts.

“In this vein, I was extremely fortunate to have assumed the unofficial title of ‘patent shepherd’ and to have worked with the company’s outside patent counsel on the development of our group’s ideas related to CVD thin films,” Russell says. “In addition to assisting with invention disclosures and patent applications for our entire group, I was privileged to be named a co-inventor on 11 of ATMI’s U.S. patents.”

As Russell’s role expanded in this area, his mentor at ATMI suggested he might consider a career in intellectual property law – advice Russell took to heart. He eventually applied to law school and earned a J.D. from Georgetown University.

As a patent attorney for Greenberg Traurig, Russell is responsible for patent preparation and prosecution, patentability and risk assessment evaluations, portfolio management, and client counseling. Throughout his career, he has prepared and prosecuted numerous applications across a wide range of technical disciplines, including for businesses that range from paper manufacture to fin field-effect transistors.

“The majority of my work throughout this last year has been related to a client’s development of optical systems and related materials for augmented-reality and virtual-reality devices and headsets,” Russell says. “My interactions with client engineers and business team leaders across these various fields has been markedly facilitated by an education in materials science. The interdisciplinary nature of materials science allows its degree holders to successfully co-integrate across a wide spectrum of careers and job functions.”

Russell’s advice to current students: Take responsibility for your education.

“Work with your advisors to develop a plan that suits you,” Russell says. “At the graduate level, as with anything, time will pass more enjoyably if you’re passionate about your research project.” 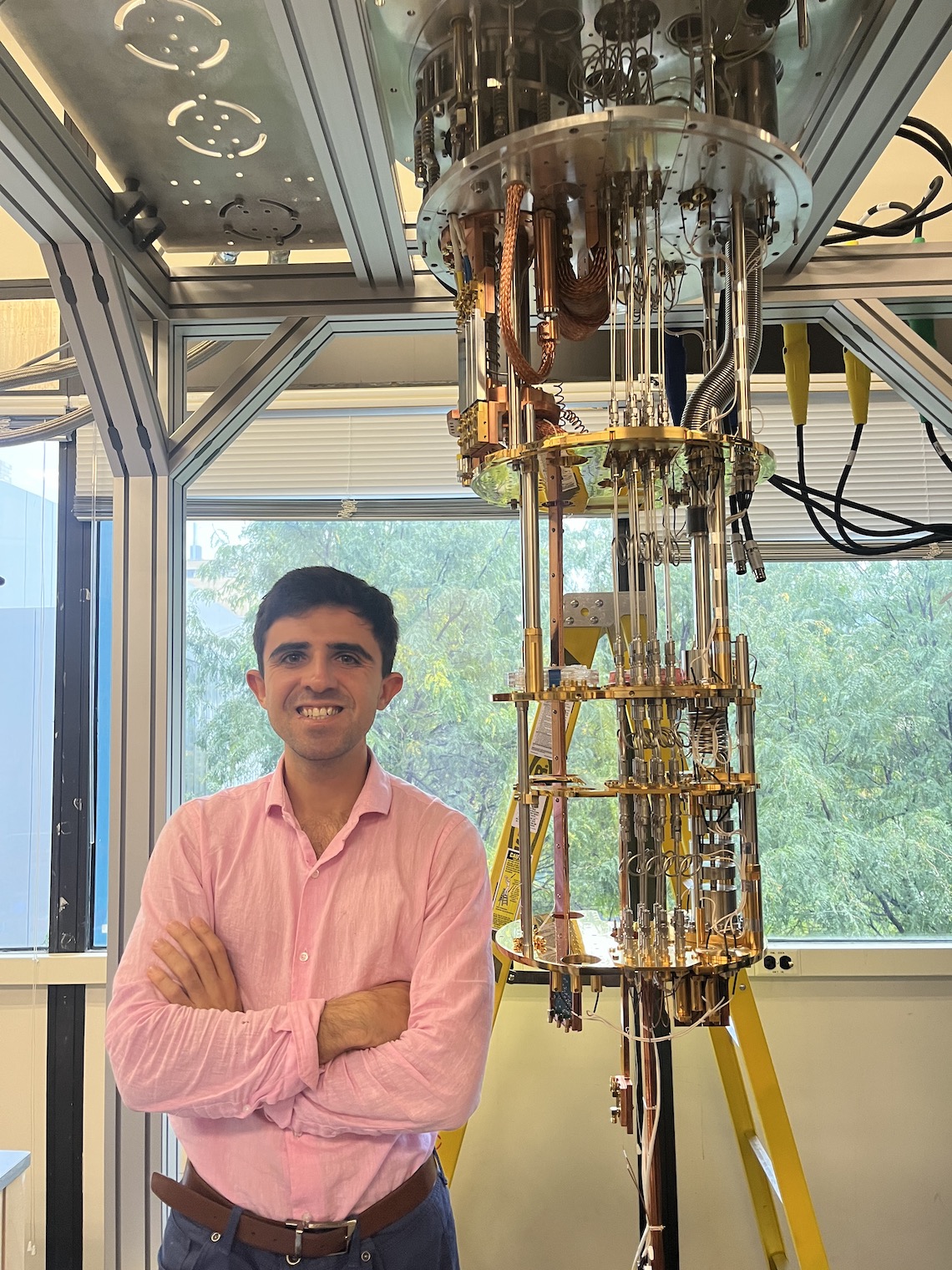 Advances in quantum computing are poised to provide a wide range of benefits to society, with potentially transformative applications in medicine, energy, communications, and materials development.

“My goal is to build the hardware that will get us there,” says Nima Leclerc ’20, a Ph.D. student at the University of Pennsylvania’s Sigillito Group.

Having worked in the Jena-Xing Group at Cornell MSE and at the quantum computing startup PsiQuantum during his undergraduate years, Leclerc wanted to devote his Ph.D. to solving some of the fundamental engineering barriers to quantum technologies. His current focus areas are on quantum control techniques in silicon-based processors, and on-chip quibit connectivity over large entangled states. In other words, he is helping to advance how the building blocks of quantum computers can operate and communicate with each other. To do this, his research group fabricates their own quantum dot processors that utilize up to four quibits.

“I am most excited about overcoming the engineering roadblocks that will allow us to scale the quantum computers of the future,” Leclerc says. “Quantum computers consisting of millions of qubits – their most fundamental constituents – have the potential to revolutionize the way we do drug and materials design today, truncating the research and development timeline from decades to only a few years.”

Leclerc adds that radical innovation in quantum computing must come at the intersection of academic disciplines. It’s one of the reasons he embraced his education at Cornell MSE, which he says allowed him to pursue interests in materials science, electrical engineering, computer science, and physics. He also credits his time at Cornell for his ability to problem solve.

“For instance, the problem sets and exams in professor Darrell Schlom's electronic properties class were all aimed at solving real, open-ended materials design problems that I encountered at startup companies developing entirely novel materials for low-power computing,” Leclerc says. “I would not have developed the holistic mindset I have to engineering quantum processors if it weren't for Cornell's interdisciplinary coursework.”

Aside from his time in the lab, Leclerc is a fellow at Perry World House, a UPenn policy engagement center, where his focus is on translating research for policymakers – a critical skill that he says can give scientists and engineers a seat at the table when it comes to advocating for technological solutions to environmental, health, and security challenges faced by the nation. He recently used these skills to publish an opinion editorial on the importance of U.S. investment in quantum computing for JustSecurity.org, and coordinated a full-day workshop examining the future of space technology and policy.

Leclerc is keeping his options open for when he finishes his doctoral studies, and says he will be looking for ways to deliver maximum impact with his research and knowledge.

“My long-term goal is to contribute towards scaling quantum computers to the point where society will realize drastically different ways to solving previously intractable problems,” Leclerc said, “such as discovering drug targets for the suppression of amyloid-beta in Alzheimer's or efficient catalysts for nitrogen fixation agriculture.” 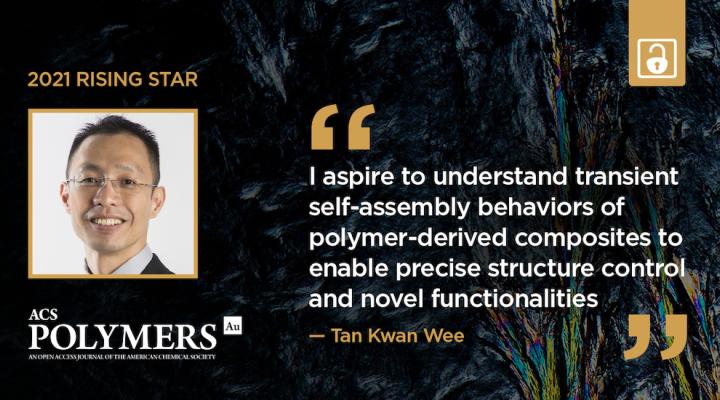 Tan, who was selected to ACS Polymers Au’s list of Rising Stars in Polymers, discusses how his time at Cornell inspired his career, and what the future of self-assembling polymers holds. Read more about ‘Rising Star’ Kwan Wee Tan, Ph.D. ’14, discusses Cornell and polymer self-assembly 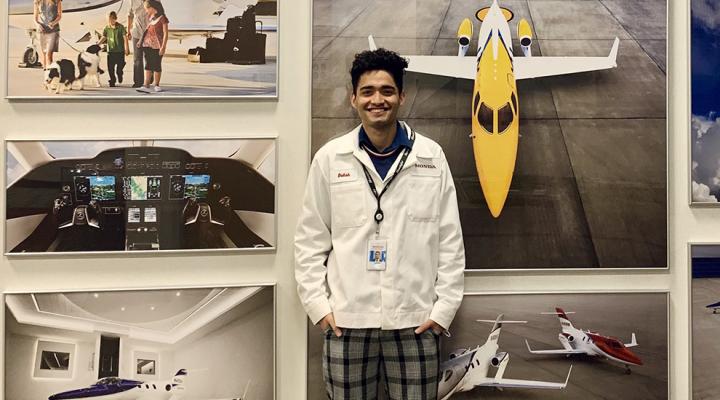 Daksh Arora '19 is an MSE Alum who is currently working at Honda Aircraft Company as a Stress Engineer. Daksh talks more below about his time at Cornell and what inspired him to choose Materials... Read more about MSE Alumni Spotlight: Meet Daksh Arora '19 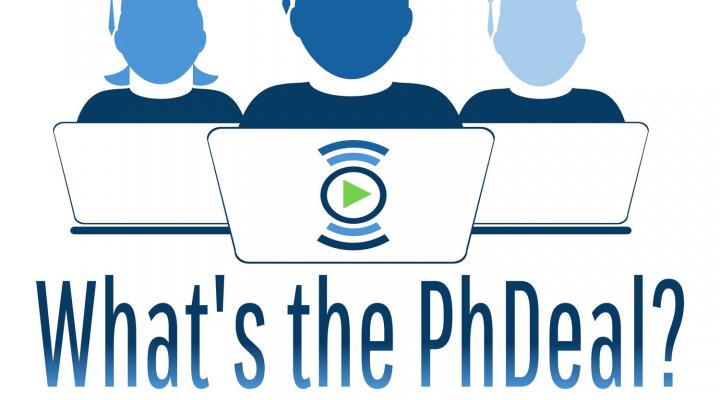